Enemy in Shadow Hearts: From the New World

Defense system that was an accidental by-product of a genetic engineering experiment to revive a strand of unknown DNA. Huge size belies an incredible agility. 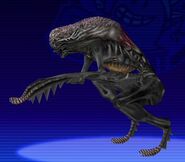 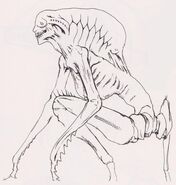 Acteon shares its names with a genus of predatory sea snail, which in turn derives its name from Actaeon, a figure from Greek Myth who was turned into a stag and hunted by his own hunting dogs.

A hunter, he spied the virginal goddess of the hunt, Artemis, bathing in the woods. As punishment for seeing her nakedness, Actaeon was cursed so that if he spoke, he would be transformed into a stag.

When his hunting party called out his name, he unthinkingly replied, as was instantly transformed. In this state, his own pack of hunting dogs, not recognising their master, set upon and tore him to pieces.

Retrieved from "https://shadowhearts.fandom.com/wiki/Acteon?oldid=34433"
Community content is available under CC-BY-SA unless otherwise noted.