Heroine from previous adventure. During the battle with Albert, she sacrificed herself to save her lover's soul. Her cute exterior belies her strong will.

She was born in 1893 to Father Morris Elliot, an English Priest, and was raised in London, England. Hearing supernatural voices in her early childhood, Alice later became an exorcist and worked together with her father. After her father's untimely death by a warlock calling himself Roger Bacon, she is found by the Japanese government who tries to escort her back to Japan. However, on the way to their destination, the warlock kills the soldiers protecting her, intent on kidnapping her. That's when her and Yuri's paths cross for the first time. They travel through Zahaoyang Village, meeting Master Zhuzhen Liu, and when they exorcise the village, they travel to Fengtian. There, Marguerite Zelle (or Malkovitch) nearly blows them up in a stunt to confuse the Japanese Army, and they save her from being devoured by frogs in the sewers. Marguerite flies them overseas where she crashes in the small town of Dahlian, where Alice gets struck down by Li Li's curse. Zhuzhen arrives and they are able to revive Alice. Lieutenant Colonel Kawashima (disguised as a smuggler boss) offers to take the party on her group to Shanghai, and there they defeat Li Li, who they find out is being controlled by Dehuai. They arrive at Shanghai and at Master Xifa's Spiritual Trials, Dehuai breaks in and kidnaps Alice for his Demon's Gate Invocation. Soon after he tortures Alice, the party holds their ground against Dehuai long enough to save Alice, and soon they kill the final Yamaraja monster, Calamity. Albert Simon awakens the Seraphic Radiance, who Yuri unsuccessfully tries to fuse with. His soul becomes trapped in the Graveyard for 6 months.

Alice and Zhuzhen continue to work as exorcists and reach the town of Prague, where a man named Terry asks them to exorcise the Blue Castle in Bistritz. They agree, and soon after, Terry is killed by Arcane Olga. Alice defeats mayor Kevin after finding out his true colors with the vampire Keith Valentine, and they find out that he locked away Yuri in his tower. Using her powers, Alice is able to go into the Graveyard, where she willingly subjects herself to the Four-Mask's Curse in order to free Yuri. He defeats Fox Face and they go back into the real world. After, they journey back to Prague, where Alice again meets Arcane Olga. She defends herself long enough for Yuri to walk in, and they are forced to go to Rouen. Alice escapes to the alleyway her father was killed in, and Albert Simon tries to kidnap her, too. Marguerite jumps in just in time to save everyone, and they go and talk to Father Doyle, who gets killed by Arcane Olga. They go to London, and the group defeats Jack and his mother in the Orphanage. They go to Cailos Mental Hospital where Alice kills Arcane Olga. Albert Simon, however, escapes with Koudelka, and they go to Wales, where they meet the real Roger Bacon. He lets them face Albert Simon in the Neameton Monastery, where they defeat him, and he raises the Float.

Alice goes to bed shortly after, and goes to face Atman alone. Atman kills her, leaving Alice with only hours to live. She stays alive long enough to kill Albert Simon and the Meta-God, and she dies on a train ride to Zurich shortly after. However, she can be saved if the player participates in a side quest before a certain point in the game.

The first mention of Alice is when Gepetto tells Karin about his niece's death. When they find the Emigre Manuscript in the Neameton Ruins, Yuri instantly thinks of Alice. They progress through the journey, and in the middle of the game, Roger Bacon and Yuri try to use the Emigre Manuscript to raise Alice from the dead. However, just a few minutes into the ritual, the Moon Crystal breaks, cracking Alice's vessel. She appears before Yuri to tell him that she loves him. Yuri collapses and finds himself on a train. There, he sees Alice, and they talk before Yuri tells her that there is one more thing he has to do before he can be with her again, and that is to go back in time to save her after killing off Kato. He does so, and he goes back in time to save Alice from being killed by Atman in the Good Ending.

Alice wears a blue and white mini dress decorated with white buttons on the chest. Underneath, she wears a white petticoat that adds volume to her dress. She has white tights which end at her thighs and brown shoes. Her white hair is held up in a bun with a blue ribbon. She wears the pendant given her by her father around her neck. Also, when using her powerful Advent, pink underwear can be seen by looking under her dress. The color changes whether she wears black or white underwear (equippable items in the game).

Alice is referred to early in the first game as a "Demon Eyes," a person capable of sensing evil or other emotions that normal people cannot feel. Whether this attributes to her ability to cast healing spells and light magic is unknown. Her powers do make her a target of kidnapping by both Albert Simon and Dehuai, the latter intent on using her to invoke the forbidden Valorization. It may be this power that saved Yuri on the train in the beginning as well. Before Simon can finish Yuri off, her pendant glows and lifts her into the air. This distraction allowed Yuri to come forward and strike the warlock, then escape with Alice in tow. She is capable of calling on holy powers to heal and/or defend the group. She can also bend the light to create powerful attacks, such as Blessed Light (a move that most holy people have, such as Nicolai Conrad), or Advent.

Alice is first met while helpless in pursuit. She comes off as very angelic, possibly naive, and definitely wary of Yuri. As the story progresses, though, she begins to understand Yuri's struggle with the malice inside of him, and the heaviness that being a Harmonixer has brought him. This becomes a great strength for Alice as she bears the brunt of the Four-Mask Curse in exchange for saving Yuri's soul.

Alice's main weapon is chosen from a collection of Bibles and other tomes, comically smacking her foes with them.

However, she is more suited to magic, with a specialization in healing magics. At first Alice's only use is in curing and defending. Later, she learns damaging light class spell such as "Blessed Light." Her "Arc" and "Resurrection" spells are great assets, and her "Advent" spell does heavy light-class damage to all enemies, with Dark Seraphim's "For the Children" its only equal in damage output.

"Would you be surpised if I said I hope our journey never ends? I don't know when it is going to end... but it pains me to feel it coming." (After Yuri defeats Atman in the Good Ending)

"Yes, Roger Bacon, or should I say... Cardinal Albert Simon!" (The big reveal to who Albert really is)

"Yuri... I... love you." (Alice to Yuri when he tries to use the Emigre Manuscript for her)

"I know why you stayed there alone. You were afraid to lose yourself.... You realised that the only way to protect your soul and memories was to die. The times you spent with your friends, your feelings for the friends you fought beside, all of your experiences to this point.... All that is what made you what you are, made you into the man you are today... yes, the man I know... the man I love....

Now you don't have to suffer anymore. You don't have to be alone anymore. I'll always be right here by your side. Now we'll be together forever...." (Alice to Yuri in the Good Ending of SH Covenant)

Alice has also appeared in Chaos Wars as one on the many cross-over characters from the Shadow Hearts series.

Her ultimate skill is "Advent", the same as in Shadow Hearts.

She also wields her Holy Book of Flesh weapon. 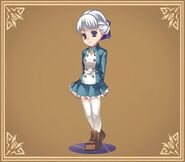 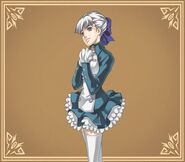 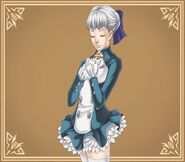 Advent
Add a photo to this gallery

Retrieved from "https://shadowhearts.fandom.com/wiki/Alice_Elliot?oldid=38595"
Community content is available under CC-BY-SA unless otherwise noted.