God of Wrath and Lord of the Demon World.

Yuri and Karin must fight him alone. Defeating him unlocks Amon for Yuri's Fusions.

The God of Wrath. This demon represents the antithesis of creative power. When he descends to Earth, it usually portends a historical change for mankind.

Ack! Yuri and Karin are alone here! Hopefully you de-equipped crests from your other party members before entering Mirror Castle, if not this battle is likely still very possible.

Yuri will do all the attacking here, Karin's just for support.

Amon will use attacks like Demon Rays and The End, but they will only do around 60 damage or so.

Have Yuri fuse into the Fire Fusion and cast Rage on himself. Use Energy Charge as well if you have it. Then attack away at Amon! Meanwhile, Karin should be ready with a Cure/Arc Cure/Thera item when Amon attacks.

The battle really isn't that hard if you just have Yuri attack and Karin heal every time Amon tries to get a hit in. 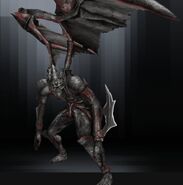 Amon is one of the 72 Goetic demons of hell.

His rank is a Grand Marquis of Hell, where who governs forty infernal legions.

He appears as a wolf with a snake's tail. It is said that, in the command of a mage, he can take the shape of a man with a raven's head, and is said to tell all things of the future and the past.

It is believed that his name derives from the Egyptian god Amun, while the spelling comes from his worship by the Greeks as "Ammon", whom they saw as an aspect of Zeus.

Retrieved from "https://shadowhearts.fandom.com/wiki/Amon_(SH:C_Boss)?oldid=36953"
Community content is available under CC-BY-SA unless otherwise noted.