Creature found in Nahash Temple, in the Director's Cut edition of the game. 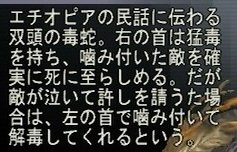 Rough translation:
From Ethiopian folklore comes this two-headed snake. The head on the right can bite with a deadly poison, causing certain death. But should its victim cry tears of supplication, a detocifying bite from the left head can cure it.

Right head stretching
Add a photo to this gallery

The Amphisbaena derives from Greek mythology, having been spawned from the dripping blood of Medusa's severed head.

As described in its bestiary entry, it had two heads, that were both capable of spewing poison.

Retrieved from "https://shadowhearts.fandom.com/wiki/Amphisbaena?oldid=35515"
Community content is available under CC-BY-SA unless otherwise noted.