A monster born out of the resentment of wild cattle hunted by men. It has not forgotten what they suffered and is looking for revenge. Loves grapefruit. 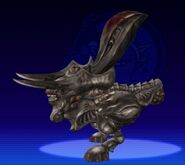 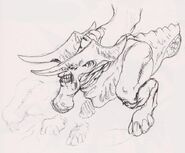 A mistranslation of Anhangá - a divine protector spirit, that protected animals, found in the beliefs of the South American Tupi people - one of the indigenous peoples of Brazil.

Appearing in many forms, but most commonly as a horned deer-like creature, he was the protector of the hunted in the forests, protecting the animals against the hunters. When the hunted would escape, it was said that Anhangá had protected them and helped them to escape.

Retrieved from "https://shadowhearts.fandom.com/wiki/Ananka?oldid=34454"
Community content is available under CC-BY-SA unless otherwise noted.