It is first visited by Karin Koenig and Nicolai Conrad in order to retrieve the Holy Mistletoe for use against the "Demon of Domremy".

Located in the Vatican, the tower has had a long and turbulant history, having been used previously as a prison and dungeon. In Shadow Hearts: Covenant, it houses the Holy Mistletoe and the vault of malice.

Accompanied by Karin, Nicolai made his way to the tower's summit where the Holy Mistletoe, an ancient holy relic, lay, with the intent of using it on the Demon of Domremy.

Before it could be claimed however, the duo had to fight and defeat the Mistletoe's guardian; The Gargoyle.

"Godslayer! Pandora's box has been reopened! The age of Darkness is nigh!" - Nicolai

It is visited later in the game by Yuri and company in an attempt to stop Nicolai. However, by the time they scale the tower, Nicolai manages to open the "vault" - a sealed chamber of the pent up malice felt by the spirits of the tower's bloody past.

It was his plan that the malice would escalate the war and create more death and atrocities. In his own words:

"(The Malice) will creep into the hearts of people all over the world. All their petty, paltry vices would become magnified...warped into anger, bitterness and envy. Don't you see? men will slaughter each other like cattle to get ahead! Yes, the 21st Century will be a time of unprecedented conflict and bloodshed!"

Transforming into the demon Astaroth, he and the party then do battle.

Defeated by Yuri, Kato suddenly appears and rescues the fallen Nicolai before teleporting him away.

Ingame Map (Note: 4F and 5F are skipped in the first visit) 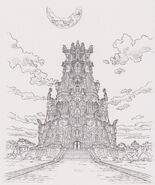 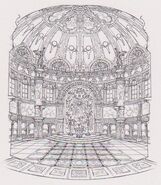 Add a photo to this gallery
Retrieved from "https://shadowhearts.fandom.com/wiki/Apoina_Tower?oldid=38466"
Community content is available under CC-BY-SA unless otherwise noted.