Viewed by some as god and some as devil, this three-faced god shows either anger, love or indifference. It's current face is anger until the world's end. 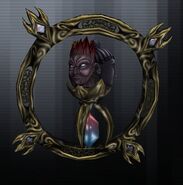 The second face of the Ashra

Ashra is a mistranslation of "Asura" ("阿修羅" - Sanscrit: "असुरो") - a set of low-ranking gods/demi-gods in Buddhism, originally from Hindu mythology, as power-hungry beings who sometimes fought against the gods.

They are typically depicted with three faces and multiple arms, with each face bearing a different expression. They normally embody some extreme emotion (anger, pride, sorrow, etc), but are not always actively malicious.

While usually powerful, short-tempered, and destructive, they were not always actively malevolent, and sometimes depicted as either benevolent, or neutral.

Retrieved from "https://shadowhearts.fandom.com/wiki/Ashra?oldid=30084"
Community content is available under CC-BY-SA unless otherwise noted.