Penultimate area of the game.

It was at the very heart of the Nemeton Monastery, hidden just beneath the pews, using an ancient celtic cauldron, where Patrick began the ritual to resurrect his late wife, Elaine.

Upon completing the ritual, a gigantic plant spread itself across the church, covering every inch in vines. At the centre, a giant stalk, topped by an equally large flower, sprouted, containing inside it the reanimated body of Elaine.

Unfortunately, the body lacked her soul, and was a lethal, animalistic beast. Horrified at what he'd unleashed in the church, he was powerless to stop it. He died at the foot of the plant, his remains covered in vines.

In order to purify the site, James O' Flaherty, threw a Holy Relic, the arm of St. Daniel into the cauldron, causing the vines to burst into flames. Leaving the path open for them to confront the reanimated Elaine. 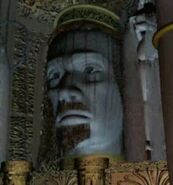 Cauldron of Life
Add a photo to this gallery
Retrieved from "https://shadowhearts.fandom.com/wiki/Church?oldid=31260"
Community content is available under CC-BY-SA unless otherwise noted.