Area preceding the Church. It is the final area of the second disc.

Used in a puzzle to unlock the safe hidden away in the Library. The player must assemble the glass fragments, and repair the window to find out the password.

The glass fragments make up the word "θυσία", Greek for "sacrifice". 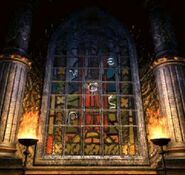 Window (with fragments)
Add a photo to this gallery

Though the Church area is visible, the pathway is blocked by a plant, and cannot be accessed until the later half of the final disc.

It is also in this area that the Gargoyle is initially found and, where it can be defeated on the third and fourth disc.

Ruined Nave
Add a photo to this gallery
Retrieved from "https://shadowhearts.fandom.com/wiki/Church_Nave?oldid=31251"
Community content is available under CC-BY-SA unless otherwise noted.