Low-level member of the secret society. Despite being at the bottom, these soldiers are highly-trained in all forms of combat, both armed and unarmed. 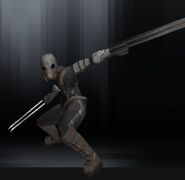 Clawed Soldiers have also appeared in Chaos Wars, and are fought as one of the many cross-over enemies from the Shadow Hearts series.

Entry
Low-level members of the secret organization Sapientus Gladio. Even low-level members are tained as master assassins, so do not underestimate them. They are under stress everyday from hard work and having to take care of incompetent bosses.

The Clawed Soldiers bear a resemblance to the Shocker Combatmen from the Kamen Rider series, particularly to the ones appearing in Kamen Rider The First.

A trademark of the Combatmen is their high-pitched "Yii!" war cry, a quirk that's imitated by the Clawed Soldiers.

Retrieved from "https://shadowhearts.fandom.com/wiki/Clawed_Soldiers?oldid=33969"
Community content is available under CC-BY-SA unless otherwise noted.