Beloved puppet of Gepetto that accompanies him in battle. She is named for Gepetto's late daughter.

In the Dollhouse sidequest, the soul of Cornelia calls out to Gepetto from the puppet, implying that some part of her being resides in the soul to aid and protect her father.

Cornelia has also appeared in Chaos Wars as one on the many cross-over characters from the Shadow Hearts series.

Her ultimate skill is "Ecstasy", the same as in Shadow Hearts: Covenant, and again is used as the main weapon of Gepetto. 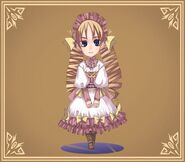 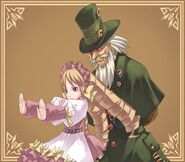 As Gepetto's special weapon.
Add a photo to this gallery
Retrieved from "https://shadowhearts.fandom.com/wiki/Cornelia?oldid=37332"
Community content is available under CC-BY-SA unless otherwise noted.