Ancient and powerful angel of darkness.

Optional boss that, when defeated, allows Yuri to fuse into the Dark Seraphim.

Neither fully material nor fully spiritual, it is a being of pure power. Lacking any emotions, it destroys any object or person in its path.

How to Unlock[edit | edit source]

To unlock the boss fight with the Dark Seraphim you must unlock all fusion monsters including the optional Neo Amon and have obtained the Reborn Droplet. Then head into the Graveyard and enter the room where Jeanneshows various memories of Yuri on these 2 screens. You will first enter a cutscene with Ben Hyuga and the fight will then begin.

This boss isn't as to tough as it was last time but it can be quiet a hassle if you're not prepared. First it's recommended to use accessories to boost your attack and defense to deal more damage and take less damage from the boss. Even then use Gaudion's Arc Shield to keep the damage you take low. Then use either Neo Amon or Fides to do tons of damage. Just watch out for Dark Seraphim's abilities as they can annoying and a hassle to deal with. 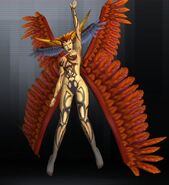 Casting a spell
Add a photo to this gallery
Retrieved from "https://shadowhearts.fandom.com/wiki/Dark_Seraphim_(Boss)?oldid=37071"
Community content is available under CC-BY-SA unless otherwise noted.