Boss Enemy in Shadow Hearts: From the New World that guards the Aito Cave.

An animal deity known as "The Horned Giant." Protects a ring that gives off a blue glow. Wild flames given off by its body burn anyone harboring evil intent.

First of all Delget will use Petrify so have Mirror Bracelets equipped.

Delget has very high attack so use Arc Shield to increase your party's defense. The Delget has the element of earth so use Air Stellar attacks or Air Edge to take advantage of the battle field.

Arc Gale shall be very useful here as the less he attacks the better, and Slow will be of use here as well. Be warned, however, as Delget will use Energy Charge to increase his own Physical Attack to 125%, so brace yourself!

Resurrection and Cure Stellars will also help to regain the HP points you lose due to his high attacks. 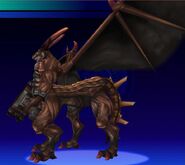 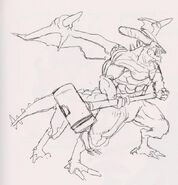 Delgeth was an "Anaye" - entities born from a human woman who engaged in evil magics, and mated with various animals, beings and plants. Delgeth's father was an antler, and it was depicted as a monsterous hell-deer.

It was somtimes linked with the "Teelget", an otherwise identical creature, save for a bloated body, and the lack of a head.