Otherworldly snake that swallowed a pregnant woman whole and absorbed the fetus into himself. The human half is in agony and screams constantly. 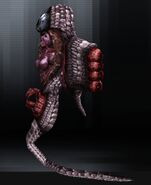 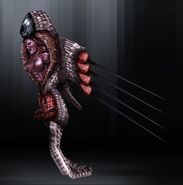 Echidna ("She-viper") is a Greek monster that resembles a woman with the body of a serpent.

Famously called, "The Mother of all Monsters", with her mate, the dread Typhon, she mothered many well-known Greek monsters, such as the three-headed dog Cerberus, the Hydra, and the Chimera, among many others.

She lived alone in a cave, and preyed on unfortunate humans who wandered too close. She was eventually killed by the multi-eyed giant, Argus, who killed her as she slept.

Retrieved from "https://shadowhearts.fandom.com/wiki/Echidna?oldid=33980"
Community content is available under CC-BY-SA unless otherwise noted.