Larval form of Elaine. Bending her body in unnatural ways, she has turned into an inhuman monster. No longer the Elaine that James once knew, she is an abomination against God.

Pupal form of Elaine. Her skin hardened against magic, she possess no intelligence and works only on animal instinct. Her presence is anathema to humanity.

In this first battle, Elaine is immune to physical attacks, so concentrate on attacking with magic.

Fortify INT on Koudelka and James for a few rounds, Keep Edward away she can't take physical damage, then after a few rounds of fortifing INT, Healing in between if needed, have them cast Tornado on her, this should give her 1,600 damage depending on your level of Tornado

Once she has been defeated, the second battle will begin.

In this second battle, Elaine is now vulnerable to pyshical attacks, but is more resistant to magic.

Keep everyone away, have Edward use the Crossbow, who ever has level 2 healing to heal, and the third use Megalith on her, low damage, but the fight will move faster.

After the fight, Elaine will transform into her Final form. 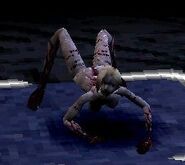 Side
Add a photo to this gallery

Retrieved from "https://shadowhearts.fandom.com/wiki/Elaine_(Boss)?oldid=30866"
Community content is available under CC-BY-SA unless otherwise noted.