Ernest lives in Montmartre, Paris, along with his pet wolf Tetsu. When Yuri and the party pass through the town, Ernest approaches and challenges Yuri to a Wolf Bout, for Blanca to fight Tetsu one-on-one. Upon victory, Ernest gives Blanca the Stamp Card.

Zoologist who lured Blanca to the Wolf Bout. He treats his pet, Tetsu, like his own grandson, but behind his glasses, he hides sharp, calculating eyes.

Ernest in his fursuit. 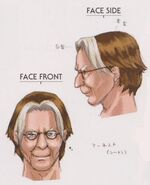 Ernest is loosely based on Ernest Thompson Seton - founder of the Boy Scouts of America, and pioneer of the genre of animal fiction.

His most famous work is "Wild Animals I Have Known" - of which "Lobo the King of Currumpaw" is the first story - a somewhat fictionalised account of his hunting of a pack of wolves, headed by the black wold Lobo, and his mate, the white wolf Blanca.