A giant ant with spiritual power.(*)

Creature found in Sea of Woods, in the Director's Cut edition of the game.

Rough Translation:
A creature that has lived in the bushy undergrowth for over one-hundred years, and changed into a being called a Futtachi. This Futtachi holds a grudge from when it was an ant, burnt under a magnifying glass, gaining a huge body so that it can prey on humans.* 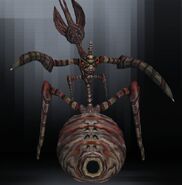 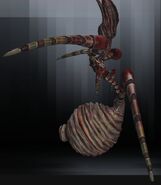 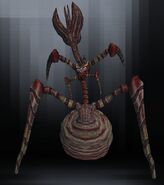 Futtachi is a non-specific type of yōkai, where an animal (typically a chicken, or monkey, in ghost stories), having lived for an extended period past their species normal lifespan, gains magical powers, and often, an increase in size.

Retrieved from "https://shadowhearts.fandom.com/wiki/Futtachi?oldid=37014"
Community content is available under CC-BY-SA unless otherwise noted.