Oracle working secretly for Ishimura. He is the 18th in direct succession from Seimei Abe, a powerful mage. He was quite handsome in his youth.

Garan attempts to make himself a fearful and powerful enemy towards the gang, but is never taken seriously and is sometimes even ignored. For example, when he asks if they have any last words before they fight, Yuri asks where he can find a floating pillow like the one Garan is sitting on. Usually such disrespect throws Garan into murderous fits of rage, but he is also very intelligent and clever (succesfully trapping the gang twice in magical dimensions). He also distrusts Kato, and tells Ishimura that he has been practicing strange magic and almost been court-martialed in Europe.

Although never taken seriously by the heroes he is actually a very powerful magic user, trapping them both in the Otherworld and Purgatory. He also hypnotized Kurando into fusing with Tsukiyomi to attack Yuri and the gang. In addition his connection to Purgatory enables him to appear as a ghost and haunt the Dog Shrine until Kurando was able to get rid of him. 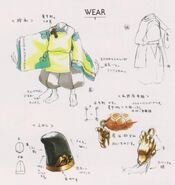 Retrieved from "https://shadowhearts.fandom.com/wiki/Garan_the_Oracle?oldid=33890"
Community content is available under CC-BY-SA unless otherwise noted.