An offshoot from Yggdrasil, the "Tree of Life", it has magically grown to a huge size. It needs to consume meat in order to survive, wrapping its prey in its long tendrils before swallowing them whole.

It is simply a plant-like creature though it has a beaked "mouth". Four long, branch-like tendrils are used to attack its enemies, and it is rooted (pardon the pun) to the spot and is unable to move in battle.

Have Edward use the vital hammer and whack the boss, this will heal Edward, so don't worry about healing, have Koudelka cast Flare in the corner, when Edward starts hitting 0, that means it's about to die, one more Flare from Koudelka and it dies. 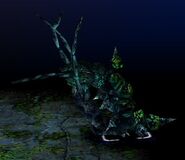 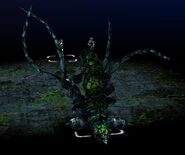 Open mouth bud
Add a photo to this gallery
Retrieved from "https://shadowhearts.fandom.com/wiki/Giant_Plant?oldid=36721"
Community content is available under CC-BY-SA unless otherwise noted.