Shadowhearts Wiki
Register
Don't have an account?
Sign In
Advertisement
in: Shadow Hearts: From the New World Enemies

A 'golden' lion made out of plain tin plate. His big dream is to have his fur painted gold. Spends his days doing battle in the hope of winning prize money.

Despite its unassuming appearance, Golden Tinny is immune to magic and physical attacks, and requires a specific setup to defeat.

It is recommended to equip at least two characters with the Apathy ring add-on, and two with the Poison ring add-on, as these are fundemental in damaging Golden Tinny, and limiting its ability to act.

Ensure that the party builds up enough Stock in the previous battles to form a combo, as any single or double regular, magic, or special attacks aimed at Golden Tinny will be immediately counter-attacked with the insta-kill ability Kill - which bypasses any defences due to its high attack power, and is not affected by Leonardo's Bear.

If it builds up enough Stock, it will do a double Kill, and wipe half the party - so be aware of its current Stock.

The player can skip turns, heal/raise fallen party members, and defend without triggering a counterattack, while Golden Tinny will just sit there and gather its own Stock.

Enter a regular combo against the Golden Tinny and hope that Poison/Apathy add-on kicks in. At the end of the combo, it will use its Kill attack on someone.

The aim is to inflict it with Apathy to stop it doing a double attack, and stack Poison so it becomes Deadly Poison, which will wreck its health. 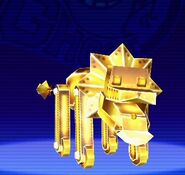 KILL!
Community content is available under CC-BY-SA unless otherwise noted.