The Great Gama is a world famous wrestler who appears in Shadow Hearts: Covenant.

Legendary pro-wrestler from India, and also Joachim's mentor. He sets up wrestling rings everywhere in the hopes of promoting the sport. He loves curry.

The highest figure in the wrestling world, he waits atop the Tower of the Holy Ring for a challenger to come and wrest the title from his rather twisted hands.

Joachim's teacher, he can be found in Southampton during the Europe travels and he can be fought one on one with Joachim. Beating him earns Joachim new Wrestler Moves.

The list of moves he can teach Joachim are:

During your second and third fights with him, he will talk about "unleashing a deadly attack" on either the third of fifth turn. This means on the third/fifth turn of that battle he will use a Third/Fifth Key, dealing massive amounts of physical damage.

He is fought one final time, in his Great Question form, on the 100th level of the Man Festival.

As "The Great Question"

Talk Portrait
Add a photo to this gallery 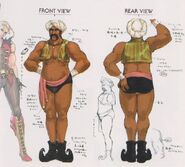 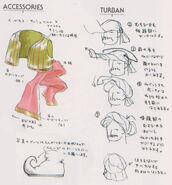 Great Gama has also appeared in Chaos Wars as one on the many cross-over characters from the Shadow Hearts series.

He appears as the leader of the Curry Men and is fought as an enemy. 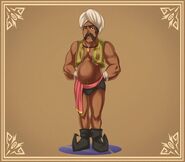 The Great Gama was the stage name of pro-wrestler, Ghulam Muhammad, considered one of the greatest wrestlers of all time - having a career that spanned over 50 years - and never losing a bout; only either winning or drawing.

His daily exercise routine consisted of grapples with his fellow wrestlers (sometimes as many as forty a day), five-thousand squats and over three-thousand push-ups.

For his diet would consume seven-and-a-half litres of milk, and nearly two pounds of a protein rich paste of his own devising.

Retrieved from "https://shadowhearts.fandom.com/wiki/Great_Gama?oldid=36461"
Community content is available under CC-BY-SA unless otherwise noted.