A meta-location included in Shadow Hearts that is not available during the normal gameplay and can be reached only by editing the game code.

Discovered by HEX editing, Harada World* functions as a limited debug mode - it is thought to be named after the game's Event Planner, Akira Harada.

The area consists of a single screen used in the Temple Ruins, and a save point.

Uniquely, the player controls Tiny the dog, who can move around in the small area - however there is no way out of the area. The debug menus are triggered by the action button inside the save point, or heading away from the crack of light.

in the US and PAL versions,

in the Japanese versions) while inside the save point will prompt the selection of the background, and trigger a battle (by default the encounter is two Wind Shears, although this can be changed via the main debug menu.)

Heading away from the light will bring up the main menu. While not as extensive as Shadow Hearts: Covenant's Debug Island, it can warp to specific plot events, play all the cutscenes, change party members (even allowing Yuri to be removed from the party), heal the party, and select the background music and monsters to be fought in the other menu. 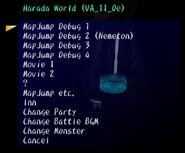 Main Menu
Add a photo to this gallery
Retrieved from "https://shadowhearts.fandom.com/wiki/Harada_World?oldid=37093"
Community content is available under CC-BY-SA unless otherwise noted.