Incarnation of fire with a fiery-red body.

Feeding on the souls of humans it kills in forest fires, some say this demigod was the source of inspiration that lead humans to roast animal flesh. 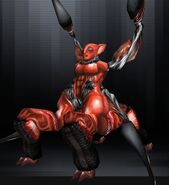 Hinogakutsuchi's face.
Add a photo to this gallery

His fiery birth killed his mother, Izanami, the goddess of creation. In despairing fury, his father, Izanagi, slew him, carving him into eight pieces that became volcanos.

Retrieved from "https://shadowhearts.fandom.com/wiki/Hinogakutsuchi?oldid=37007"
Community content is available under CC-BY-SA unless otherwise noted.