Saint’s relic kept in Apoina Tower. Fresh leaves sprout from the metal decorations. Has the power to exorcise demons, but only a few may use it.

It is a powerful mythic artifact which has the power to destroy a person's very soul. Prior to Shadow Hearts: Covenant, little is known about the actual history of the item, except that for an unspecified amount of time it was stored in Apoina Tower inside the Vatican City, and that it was originally going to be used on Albert Simon to stop him from ruining Sapientes Gladio's plans for world domination.

However, with the defeat of Albert at the hands of Yuri, Nicolai decided to use its power on the harmonixer instead.

After lying to Karin about the mistletoe's true purpose, Nicolai used her to guide him to the village of Domremy, where he was able to stab Yuri with it, and seal off his fusion abilities.

The true horror of the mistletoe is that, not only does it just get rid of Yuri's fusions, it also eats away at his soul and devours his memories.

If the curse is allowed to complete itself, then the person becomes a blank slate, with no memories of who they are or were. It's a form of dying without death.

There are only two known ways in which to break the curse; The first is to allow the curse to run its course (though that largely goes against the point of it), and the second is to die, which, in the Shadow Hearts universe, kills only the body, but leaves the soul untainted (yet again however, this defies the object).

How quickly the curse affects a person depends on their strength of will. Yuri, for instance, manages to endure the curse for at least six months, to a year, before allowing himself to die, or succumbing.

It also appears that the effects of the curse can be slowed somewhat - when Yuri regains control of Amon, Rasputin's attempts to speed up the curse are massively diminished. 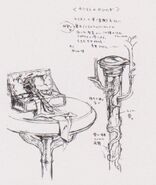 Concept Art
Add a photo to this gallery
Retrieved from "https://shadowhearts.fandom.com/wiki/Holy_Mistletoe?oldid=34929"
Community content is available under CC-BY-SA unless otherwise noted.