Little girl notable for her bright red shoes. Her one treasure is a tortoiseshell comb from her mother

Her real identity is Hsien-Hsi, 14th child of the Prince of Manchu Shangi, but she was adopted by Naniwa Kawashima. As an adult, she will be known as the Asian Mata Hari.

Living under the name Yoshiko Kawashima, she is an adopted daughter of the original Yoshiko's father, Naniwa Kawashima. In actuality a princess of Qing Dynasty China. Indeed Kurando always addresses her as "Princess" The possible reason for this adoption, not just to heal the wounds of the original Yoshiko's death, but to keep her away from Minisher Ishimura, who intends to use her as a tool for controlling China.

She gets a brief mentioned in Shadow Hearts by Major Kutsugi in the Asia Section when he notifies Kawashima that her father has adopted a child from the Qing Dynasty.

Following events in China during the first Shadow Hearts, she was relocated to Yokohama, Japan, to live with Naniwa. Following the death of Naniwa's biological daughter Yoshiko Kawashima, he decided to rename Hsien-Hsi to in her memory.

In Shadow Hearts: Covenant, Yoshiko inadvertently causes trouble for her bodyguard Kurando, by getting herself kidnapped. She also develops a deep affection for Blanca.

After assisting Kurando in saving her in Yokohama, she thanks him and gives him the name "Snowball" which at first he did not tolerate. She drops a comb, which is a special accessory for Blanca. While Yuri and his friends remained in Yokohama, Blanca remained close to the Kawashimas and even joins Kurando's party when Yuri vists Battleship Mikasa. Later in the game, Blanca meets Jeanne's ghost, who tells him to protect his new family. 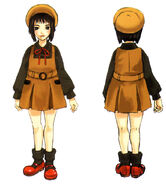 Naniwa, Yoshiko (in a kimono), and Kurando Illustration 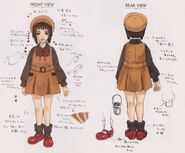 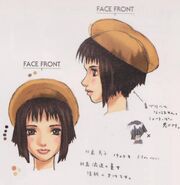 Based on Aisin Gioro Xianyu, she was born in 1907 Beijing, China as the 14th daughter to Shanqi, the 10th son of Prince Su of the Manchu imperial family. Her life was short and complicated.

Adopted at the age of eight by her father's friend, Naniwa Kawashima, a Japanese espionage agent and mercenary adventurer after the Xinhai Revolution, she was renamed Yoshiko, taking on their family name also.

In her teens, she claimed to have been raped by Naniwa's father, and later began an affair with Naniwa himself. She had many lovers, both male and female, but did marry, though it lasted only two years before divorce.

In her adulthood, she became an intelligence officer, aiding the Japanese before, and during, the events of the second Sino-Japanese war. She frequently crossdressed, in both her capacity as a spy, and her private life. She assisted in creating the Japanese-controlled puppet state of Manchukuo, and was used as a figure of propaganda when her uses as a spy were compromised.

Following the end of WWII, and victory of the Chinese, she was arrested, imprisoned, and tried for treason. She was found guilty, and in March 1948, she was executed as a race-traitor, with a pistol-shot to the back of the head.

Retrieved from "https://shadowhearts.fandom.com/wiki/Hsien-Hsi?oldid=33897"
Community content is available under CC-BY-SA unless otherwise noted.