Idar Flamme is one of the many one-time visit dungeons in Shadow Hearts: Covenant. The player enters the outer area, which is the most complicated part in the dungeon. It is a maze of large and small passages that sometimes cross each other. It is worth going through these tunnels to find treasures. Not to mention that some of the passages are blocked by eggs that spawn Gigafilaria. They are worth seeking out since each Gigafilaria defeated gives 3 souls. And they usually come in groups of six, giving a good amount of souls if all the eggs are found.

Upon reaching the door to the inner wall, there is a shop that gives the player the option to be dropped off at the entrance to the dungeon. This keeps from going through the entire maze and every enemy encounter to leave the dungeon.

In the inner part of the castle, there are doors with colors surrounding them. Above them the same colored pipe leads directly to the same colored buttons. Pressing these buttons shuts down the color and opens the doors. In this area there is a Will Power. This should be found and equipped, preferably to Lucia since her Aromatherapy can cancel out Status Abnormalities temporarily. This will help greatly in the boss fight.

Through one of the doors, there is the heart of the castle. Here there are two mini bosses: the Mother Filaria. The player fights two first. Then after their defeat, a second pair appears. Once all the Mother Filaria are defeated, the castle heart stops beating and opens the passage to the boss fight. Yuri and the others confront Rasputin, who then becomes Asmodeus.

After defeating Asmodeus, Rasputin tells Yuri that the Holy Mistletoe's curse is permanent. And he also mentions that Nicolai went to Apoina Tower to unleash the stored malice into the world. After this cutscene, Idar Flamme falls apart and disappears.

Ingame Map 02
Add a photo to this gallery 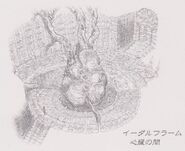 Add a photo to this gallery
Retrieved from "https://shadowhearts.fandom.com/wiki/Idar_Flamme?oldid=38465"
Community content is available under CC-BY-SA unless otherwise noted.