Immortal Mountain, or Mount Fuji, is the dungeon following the first visit to Inugami Village

It is one of the most complex dungeons in Shadow Hearts: Covenant. The reason for it is its bizarre setup. The player recieves three crystals. When placed on an altar, each different crystal can activate a teleport system that takes the player to different areas. Using these in different sequences allows the best access.

The treasure is the main reason for all this exploration, as some Crests can be found here. One path sequence leads directly to the Ring Soul, who gives Yuri and Karin an Attack Boost.

Another sequence leads to Lobo, one of the wolves in Blanca's Wolf Bout. Aside from the mixed-up map, there is really no great difficulty in the dungeon.

The player should keep an eye out for certain items. Two weapons not sold in stores are found here, along with the first Flare Brooch. Beyond a parted river of lava resides the boss battle. 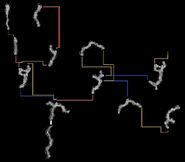 BF 01
Add a photo to this gallery

Add a photo to this gallery
Retrieved from "https://shadowhearts.fandom.com/wiki/Immortal_Mountain?oldid=38111"
Community content is available under CC-BY-SA unless otherwise noted.