Vengeful soul of a footman unable to attain Nirvana.(*)

Creature found in Sea of Woods, in the Director's Cut edition of the game.

Rough Translation:
The soul of a footman that was killed in battle, and took on the appearance of a carrion fly. Calling, "Itsumade...", it will attempt to curse you to a similar likeness; Stopping this will require some skill. If you are looking at its hideous face, it will haunt you til your dying day.* 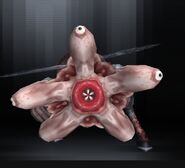 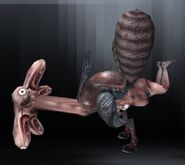 Neck stretching
Add a photo to this gallery

The Itsumade is a minor mythological creature featured in Japanese folklore, appearing at times of great plagues, flying overhead.

It was described as a flaming bird-like creature, with a bent-beaked human face, snake-like body, and razor-sharp talons.

The creature itself had no name, but was named after its cry, as it circled overhead; "Itsumade", meaning "How much longer [until you are dead]?"

It was said to feed on the bodies of fallen soldiers, the souls of which it could transform into other Itsumade. It is also said to be born from a soul of a person who starved to death. .

Retrieved from "https://shadowhearts.fandom.com/wiki/Itsumade?oldid=37015"
Community content is available under CC-BY-SA unless otherwise noted.