Two-headed demon summoned from another world. The right head seeks pleasure while the left enjoys murder. Inner conflict has driven it quite insane. 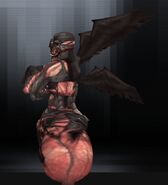 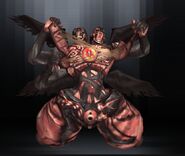 Opening their chest
Add a photo to this gallery

He was often depicted with two faces; one looking to the past, and the other, the future.

Retrieved from "https://shadowhearts.fandom.com/wiki/Janus?oldid=36928"
Community content is available under CC-BY-SA unless otherwise noted.