Boss Enemy in Shadow Hearts: From the New World.

Demon whose monstrosity knows now bounds. Gives rise to a sense of absolute revulsion in anyone who sees it. The sound of its roar can drive people to suicide.

Jeb Niglas is a monster of Light, so Dark Stellar attacks, or Dark Edge will be of use.

Jeb Niglas will use hard hit attacks so it's a good idea to keep an eye on stock.

This beast will boost up his physical and special defense so Tatan'Ka's Arc Rage and Arc Surge are of use to keep things fair for you. Wipeout will be a concern but mostly toward Shania who is dark attributed. If you keep your status, health, MP, and Sanity Points above half, he will fall easily. 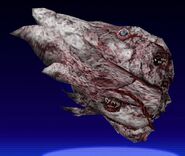 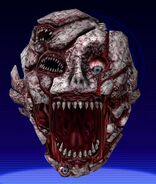 Jeb Niglas is a mistranslation of "Shub-Niggurath", a powerful amorphous deity encountered in Lovecraft's Cthulhu Mythos.

First mentioned in the short story "The Last Test", Shub-Niggurath has many mentions in later stories, generally called upon as "The Black Goat of the Woods".

While its appearance is never described, it is frequently depicted as a seething mass of eyes, mouths, and tendrils, in a state of constant flux. While generally refered to as a "she", Shub-Niggurath has also been refered to with both masculine and neuter pronouns.

It is said to be the parent of the "Dark Young", in Lovecraftian lore, which is also the name of a boss in Koudelka.