After briefly appearing in Shadow Hearts taunting his brother Keith, in Shadow Hearts: Covenant you find Joachim as the protector of the French town of Le Havre. Joachim is both a vampire and a trained wrestler who joins the party when he succeeds in defeating the mayor, who has been pestering Granny Lot for her tavern, the Seagull. A while after saving the inn, you meet Joachim's younger sister, Hilda, in her Peach Bat form.

"The Bandit of Le Havre. He only harasses the vigilante group. He rampages all night long, and only comes home, like a child, when he gets hungry."

"The bat form of Grand Papillon. Although Yuri has come across the bat before, he seems to have no memory of this meeting."

"Trained as a pro-wrestler, this vampire is devoted to justice and has dedicated himself to aiding the weak and defenseless in society."

"When Joachim wants to relax, or be alone, or go on an errand, he often transforms into his Golden Bat form (which cannot perform Special Attacks)."

"Joachim in his invisible form. As long as he doesn't make overly large movements, Joachim cannot be targeted by enemies while invisible"

"When Joachim wears his butterfly mask, he is transformed into this power champion of Truth and Justice, but it still doesn't help with his major "dysfunction"."

"Second generation Great Question, he earned the title by defeating his opponent in a harrowing battle and facing his greatest fear as a man."

Q The Great
In reality he is Hilda's brother, despite the mask. Once took part in an adventure to save the world. A lonely hero who struggles valiantly against massive debts.

Joachim is from a vampire family that lives in Blue Castle near Bistriz, Romania. He has a younger brother(Keith) and sister(Hilda) and a grandfather is the grey bat in the third game.

Joachim makes an appearance as an optional boss where he fights his sister Hildegard one-on-one.

In this fight he wears the "Great Question" mask he inherited from his master. Upon losing he gives this mask to his sister as proof of her victory, which she wears in battle whenever she is in "Curvy form."

Joachim is more the "superhero-type" since he looks heroic and more super-heroic while grand papillon.

Using powerful bludgeons and his mighty Muscle Arts, Joachim is capable of inflicting massive amounts of damage on his enemies, as well as draining their health to replenish his own.

With an attack boost he is able to equip up to five Hit Areas, along him to deal even more devastating amounts of damage.

He uses several forms to fight in battle, which change depending on his Joachythms.

His regular form is most frequently seen;

"I want to drink your blood! Hah ha! Just Kidding!"

Joachim has also appeared in Chaos Wars as one on the many cross-over characters from the Shadow Hearts series.

His ultimate skill is "Artem Buster", the same as in Shadow Hearts: Covenant, even donning a tiger-print cape. 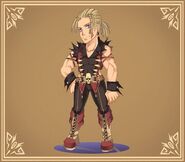 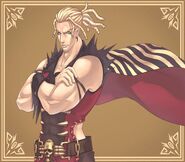 Artem Buster
Add a photo to this gallery
Retrieved from "https://shadowhearts.fandom.com/wiki/Joachim_Valentine?oldid=37317"
Community content is available under CC-BY-SA unless otherwise noted.