The Judgement Ring is a powerful device in the Shadow Hearts series used when executing a command.

Though it rarely appears out-of-battle, it is described by Roger Bacon as a powerful symbol which determines one's actions.

Two personifications of its will appear as the Ring Soul, and Ring Spirit, aiding the characters by gifting them items to improve and modify their rings.

In battle, it appears as a slanted circle when being used with colored areas on it. These areas are as follows:

Hit Areas are colored zones within the Judgement Ring that appear when an attack is chosen.

Each Hit Area equals one attack from the character, and meetings with the Ring Soul/Spirit can grant more of these.

Not every character can equip an equal number of attacks, usually being three attacks maximum for magic-users and five for fighters, four for those who are neither. In the original Shadow Hearts, however, every character only had three hit areas.

In sections of the game where you must do a ring trial in order to execute an action out-of-battle, sometimes the hit areas will be a dark red color.

Critical hits in a Hit Area can result in a +50% increase to damage.

A Strike Area is a narrow red zone at the end of a yellow attack area.

as the cursor passes a Strike Area can result in a +20% damage increase from a normal Hit Area. However, there is a greater risk of missing the area.

Critical hits in a Hit Area can result in a potential +70% increase to damage.

A Step Area is a green zone in the Judgement Ring that appears when you use a Special or Magic ability.

On most Ring Types, not striking the Step Areas will not execute the attack. On the Practice Ring, any missed Step Areas will decrease the damage or effectiveness by 10% for every one that is missed.

Usually, the more powerful the ability, the more Step Areas are present.

A Modulate Area is a blue zone in the Judgment Ring that appears when you use a Special or Magic Ability.

Modulate Areas also have Strike Areas at the end of them, which either grants the damage bonus described in the Strike Area section or grants a 20% increase in effectiveness of the Special Ability used.

Standard Judgement Ring. If a physical attack is used, all Hit/Strike Areas hit successfully will be executed, and if one is missed, all (if any) attacks before that will be executed.

If a special or magic attack is used, the attack will be executed if all Step and Modulate areas are hit.

A good ring for beginners.

It differs from the Normal Ring in that there are no Strike Areas, and if a Hit Area is missed the needle will continue to spin. As a downside, the overall attack is weakened.

If a special or magic attack is used, Step areas can be skipped although the Modulate area must be hit for the attack to be executed. However, the more Step Areas skipped, the weaker the overall attack. As with the standard attack, there are no Strike areas.

A good ring for pros.

It differs from the Normal Ring in that the Hit/Strike areas are narrower, and if any area is missed, the needle will stop and no attacks will be executed. However, as a trade-off, the overall base damage of the attacks is strengthened.

The narrowing of the ring areas also carries over to special and magic attacks, but the damage boost also applies.

An "all-or-nothing" ring, and by far the riskiest type of Judgement Ring.

If the character has multiple attack areas they will be condensed into the single narrow area. The same also applies to special and magic attacks.

Using any Third, Fifth, Seventh, or Eternal Key items while using this type will only show the barest slither of a Strike area.

The game will auto-hit the ring for the player.

Selecting this option will remove any Strike/Hit Expands or Attack Boosts on the character, and reduce their hit area to perform only a single attack, regardless of how many hit areas the character can have.

Additionally, the Auto ring will deal the most median damage possible.

While the Ring functions the same throughout the series, the design varies between the games, changing from a more Masonic design in Shadow Hearts, to having more mysticism in Covenant, to the more Tribal influence in From the New World.

The outer ring reads "SATOR AREPO TENET OPERA ROTAS", which translates as "The farmer Arepo works the wheel (a plough)". This seemingly nonsensical statment is actually a Latin palindrome, being read the same when reversed.

When written in a square, it becomes known as a Sator Square, and is able to be read in many ways:


It is actually a four-way palindrome, and as such, was once viewed as having "magic" properties, such as being able to extinguish flames, or fend off fatigue.

In four semi-circles in the next ring are the names of various angels and planets: (from the top circle working round clockwise)

Zachariel - Angel of the Sun and healing who leads souls to their judgment.
Samuel - A Hebrew prophet and seer.
Michael - The Archangel, leader of the armies of God.


Anael - Angel of Venus.
Raphael - Angel who will blow the trumpet that signals the day of Judgment.
Gabriel - Angelic messenger.


Between each semi-circle are lines formed by two interlocking squares forming a octagonal star, with Latin snippets on each, reading;
"Omne ab Propheta" (Everything from the Prophet), what appears to read "Apotheosis" (to deify), "Expiatio" (Atonement/purification), "Omne ab Propheta" again, "Aeternum" (Eternity), "Totum in Evangelium" (All the good news), and "Trinitas" (Trinity).

The innermost circle with the three eyes has text which reads: Halchÿmia, Medica, Cabala, Theologica, Magia and Aſtrologica.

According to Roger Bacon, the triangle of eyes represent determination, action,and outcome. The Judgement Ring is what allows us to do the things we normally do and determine if we pull them off correctly.

Covered in Latin script, the entire ring is heavy in esoteric symbolism.

The inscription on the outer ring reads: "HINC OMNE QUOD COELO SUBEST ORTUM EXITUM QUE POSTULAT", roughly translated as: "Hence, the rise of and outcome of the demands of all that is under heaven".

Interestingly, it lists Uranus, Neptune and the recently demoted, "Dwarf-Planet", Pluto, despite the fact that they were only discovered in the last 300 years and all the others are "Renaissance planets".

The words written around the planets read:
"Immensa Caeli Machina."
("In the immense heavenly machine.")


"Numquam Rotando Deficit,"
("At no time falling short of their spin,")


"Planeta Quisque Proprium Eundo Motum Conficit",
("Each Planet moves and goes of its own accord,")


Between them, a starfield is visible, and includes parts of constellations. Moving clockise, they appear to be parts of; Ursa Minor, Orion, Leo, and Boötes.

Both this, and the words around the planets are extracts from a text* by German Missionary, Johann Adam Schall von Bell, adressing both God and the Chinese Emperor of the time.


Roughly translated:
"In the immense heavenly machine, at no time falling short of their spin, each planet moves and goes of its own accord."
"Hence, the rise of and outcome of the demands of all that is under heaven; Thereafter, all skills and schemes has he seen and reckoned."
"Europe your guest, he submits to your gloriousness , the stars counted at once and completely restored."
"The service given to never be forgotten, due given whilst these Holy temples are in use."
"As he diligently serves GOD, and with equal obligation, the Chinese and Tartars, as well as the forms of their lives."


In the inner-most area, Three circles are positioned at the distant points of the tree in a triangular fashion.

They are labeled Luna (Moon), Sol (Sun), and Terra (Earth). Around them in a italicized font are the words Halchÿmia, Medica, Cabala, Theologica, Magia and Aſtrologica. The same words as in the Shadow Hearts design.

In the dead-centre of the image lies a heart (lat. COR) which is nestled in a mistletoe tree (lat. VISCUM) - a clear reference to the Holy Mistletoe.

From the New World[edit | edit source]

With each orb bisected with a tribal picotgram of a human, each representing one of the above elements; one with a spear and flaming torch, another with a fish-tail for legs and crowned with a water-vessel, another with headed with bull horns, and the final figure with wing-like strands from their arms.

In the lower right quadrant, there is a primitive crescent shape, with the heavily runic words reading "LVNA" (Moon).

The writing in the top-most orb, making up the image of the sun reads, "Dum Aurora Fulget" (While the Dawn shines), bisected by, "Adolescentes Flores Collgc" (Youth Collgc [sic] Flowers), a mangled transcription of the Latin phrase;

A maxim, originally in Greek, and of uncertain attribution; it means to take advantage of a situation while one has the opportunity to do so, with the sense that it is liable to change.

The lower-most orb reads "Grātiās Tibi Agō", simply "I Thank You", in Latin.

The centre image is that of a totem pole, comprising of an eagle (representing air), a bear (earth) and flanked by two fish (water). Overhead, the rays of the sun (fire) can be seen. Each represents a fusion that can be acquired by Shania ingame. 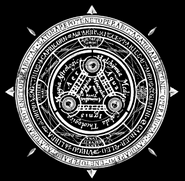 The Rings as they appear ingame. 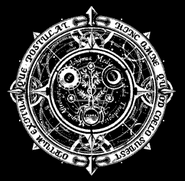 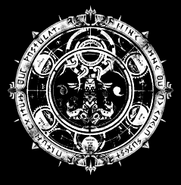 Add a photo to this gallery
Retrieved from "https://shadowhearts.fandom.com/wiki/Judgement_Ring?oldid=38157"
Community content is available under CC-BY-SA unless otherwise noted.