First Entry:
"A lieutenant in the German Imperial Army, she has been ordered by General Heimann, head of the garrison at Luxembourg, to capture the village of Domremy."

Second Entry:
"Former German army officer. After events in Domremy, she has joined up with Yuri and his companions and changed into one of Cornelia's hand-me-downs."

An officer in the German army and descendant of a long line of Bavarian nobility from Munich, Karin first encounters Yuri at the church in Domremy, when he saves her from an errant grenade. After accompanying Nicolai to obtain the Mistletoe and watching the ensuing events, Karin joins Yuri's side. She uses swords, especially rapiers, in battle and obtains Sword Art power-ups through the score of the Wagner opera Der Ring der Nibelungen. Karin doesn't really have a weakness or strength.

As revealed in the ending of Shadow Hearts: Covenant, Anne Hyuga is actually Karin Koenig, sent back in time after defeating Susano-O. Her unintended trip back in time causes her to encounter Jinpachiro Hyuga, using her alias as "Anne" given to her by Princess Anastasia Romanov as a way to hide her German heritage, eventually giving birth to Yuri.

This makes her existence a predestination paradox and Yuri's an ontological paradox.

Fiercely independent and well-mannered, she harbors a crush and later deep love for Yuri, and sticks by him in any situation.

Karin wears a dark brown shirt with no sleeves held up by a black marble necklace circlet decorated with small silver sleeves. On her left arm is a dark brown glove starting at the middle in between her shoulder and elbow, and on her right arm is a gold bracelet in between her shoulder and elbow, and on both hands are large black and bronze bracelets. Her shirt hem also has a black belt hem attached shaped like a V. She has an orange and black skirt which goes up to the middle of her thighs, and on her legs are high heel black boots which can be tied by many strings by the side decorated with orange ribbons at the top which are two inches down from her skirt. She also has a steel sword hanging on a scabbard on her skirt.

As proficient at using magic as well as her swords, Karin is a balanced fighter, but leans more towards physical attacks.

A very versatile character, she can have up to four strike areas on the Judgement Ring and deal fairly moderate damage as either an attacker or mage, or provide assistance as a support character.

Fourth Attack Area
Add a photo to this gallery

She gains more skills as finds the Nibelung acts, and in addition, the more she finds, the more powerful her existing skills become.

"I summon you... Phoenix!" (Sonnenstark)

"Don't mess my clothes up." (victory)

"Don't underestimate me because I'm a woman."(victory)

"I can still fight." (victory)

"Keep your eyes where they belong." (victory)

"Maybe you just wanted to hold hands with the old man?" (before entering Yuri's heart to face Amon)

Karin has also appeared in Chaos Wars as one on the many cross-over characters from the Shadow Hearts series.

Her ultimate skill is "Sonnestark", the same as in Shadow Hearts: Covenant.

She also wields her Durandal weapon. 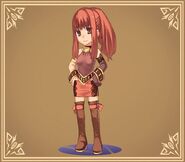 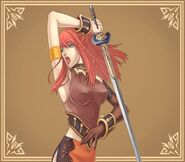 Sonnestark
Add a photo to this gallery

Retrieved from "https://shadowhearts.fandom.com/wiki/Karin_Koenig?oldid=37314"
Community content is available under CC-BY-SA unless otherwise noted.