Silver Bat
Beautiful silver bat. Its true form, not seen in this game, is that of Joachim's handsome young brother and Yuri's good friend.

Silver Bat
Squeezed between his stronger siblings, he often seems to get the short end of the stick. In his true form he's a handsome youth, but this time that's not on show.

A vampire that's at least 400 years old, Keith used to travel the world. Eventually it's seems he got bored, so he took up residence and became Lord of the Blue Castle, near Bistritz Village, Europe, and decided to take an eternal sleep to pass by his long life. Six months later after the events of the Shanghai disaster in the previous Shadow Hearts, Keith is woken up by a creature that has been taking shelter within his castle. Not being able to get any sleep because of this, Keith attempts to fight and remove it from the castle himself. However, he fails and has little choice but to seal the creature on the topmost floor. Not long after, Alice and Zhuzhen arrive at the castle to investigate the strange creature and end up befriending Keith, who was bored of his life and wanted excitement. Together they solve the mystery of the creature, who was actually Yuri, and Keith decides to stay with the party on their journey.

Keith makes a small cameo in his Silver Bat form in Le Harve outside the Seagull Inn.

After when Joachim took over the He Man Sushi Bar he was so kind thought to help his eldest brother raise the money to pay off his massive debt with the magazine articles that hardly sold anything. But after seeing that he would have to wear a ridiculous sushi costume he fled but got caught and was cursed with the smell with wasabi and unable to move. And it was up to Hilda and company to save Keith from his terrible state after facing all the sushi minions. Joachim and Hilda will obtain the tea that will cure Keith from his ailments and will continue to do his job as the Lottery Chairperson.

The most "normal" of the Valentines, with quite an amiable, easy-going nature. Nethertheless, like his siblings, he too has a tendancy for the melodramatic.

Using only his swords and arcane magic, he cuts a bloody swathe through his enemies. Teleporting to them, he attacks quickly and swiftly dealing high damage to his foes. Though the price for his high attack power is the comparitively narrow attack areas on the judgement ring: The narrowest regular attack space in the game.

His "Rituals" focus mainly on stealing HP from his enemies and using it to replenish his own health. Most of the attacks also have a chance of inflicting a negative status effect on foes.

Rituals Using secret vampire rituals passed down through generations, Keith summons creatures to do his bidding.

Gift
Add a photo to this gallery

"Bingo. Glad we’ve reached an understanding so quickly, Mr. See-Through Man. (prepares to fight) What’s the scoop? Are you the master of the monsters?"

"I’m afraid not. Neither I nor my ancestors have ever brought any harm to the people of our domain. If I did that, my granddaddies would come flying out of those caskets you saw and chew me out all night"

"My name? Oh my! How many years has it been since I gave anybody my name, I wonder? My name is Keith Valentine. Please, just call me Keith."

"My goodness, it’s hard to know whether these two are bosom buddies or sworn enemies… Which is it?"

-- Keith to Alice, as Yuri and Zhuzhen share insults.

Keith rising from his Coffin

As the Silver Bat 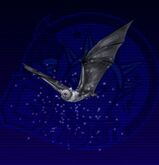 As the Silver Bat

Retrieved from "https://shadowhearts.fandom.com/wiki/Keith_Valentine?oldid=37310"
Community content is available under CC-BY-SA unless otherwise noted.