Ancient King of Israel, he reigns over the spirit realm.

Author of the Solomon's Key, and a master of magic, this optional boss will only appear when the Key has been completed correctly and the player has spoken to Sarah.

King of ancient Israel. A mage of great power, he conquered 72 demons and bent them to his will. Since his death, he has become ruler of the Spirit World. 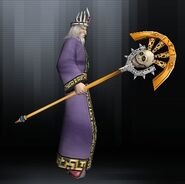 Side profile, and staff
Add a photo to this gallery

King Solomon (שְׁלֹמֹה‬) is a King of Israel referenced in the texts of the Abrahamic religions. The Quran and Bible identify him as a son of David.

The Bible credits Solomon as the builder of the first temple in Jerusalem, and portrays him as great in wisdom, wealth, and power, but ultimately as a king of sin, including idolatry and turning away from God.

Solomon is the subject of many other later references and legends. In some stories he is seen make a deal or confronting Asmodeus, the demon bound in Egypt by archangel Rapheal.

A recurring motif is of his ability (via magical trinkets or spells) to bind genies and demons to his will.

Retrieved from "https://shadowhearts.fandom.com/wiki/King_Solomon?oldid=37070"
Community content is available under CC-BY-SA unless otherwise noted.