Disgusting abomination and symbol of chaos.

Boss Enemy in Shadow Hearts: Covenant, and a recurring enemy in the series.

NOTE: Can be photographed by Anastasia to obtain the "Spirit Ward" move.

Creature of Chaos, born from the negative energy created by centuries of war and strife. He rejects every possible system of order and seeks their ruin. 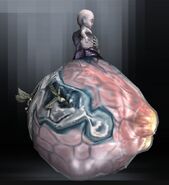 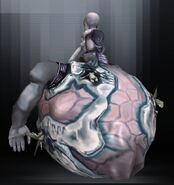 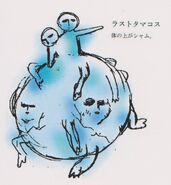 The name derives from the Japanese word "Tama" ("Sphere, ball"), and a misromanisation of the word, "Chaos".

This boss is something of a recurring feature in the Shadow Hearts series, having first appeared in Koudelka as a minor enemy, Tamacoss, Shadow Hearts as a boss, Orb Chaos, and finally, in Shadow Hearts: From the New World as a boss, Tamaris.

Retrieved from "https://shadowhearts.fandom.com/wiki/King_Tamakos?oldid=37005"
Community content is available under CC-BY-SA unless otherwise noted.