Were you looking for Koudelka, the main character?

Koudelka (クーデルカ, Kūderuka) is a console role-playing game for the PlayStation developed by Sacnoth for the Sony PlayStation, and the first game in the series that would become the Shadow Hearts series.

Set in 1898 Wales, the game follows the mysterious occurrences surrounding the distant Nemeton Monastery and the three protagonists who, by chance, are forced to investigate its dark history.

The gameplay combines elements of grid-based RPGs with survival horror elments, and exploration of the Nemeton complex to solve puzzles.

Sacnoth founder and CEO Hiroki Kikuta acted as the game's director, producer, writer and composer, following his wish to create a mature, dark, horror RPG, as he was unsatisfied with what he considered as the disjointed, juvenile, and stagnant nature of the genre.

Console Classics announced a Steam re-release in 2015[1], alothough this has not come to fruition.

The gameplay is split between two styles of play; exploration, and combat.

Controlling the main protagonist, Koudelka Iasant, the player explore the Nemeton Monastary and grounds, controlling a 3D model on pre-rendered backgrounds, with fixed camera angles, via tank-controls, akin to the Resident Evil series.

In this environment, the player is able to see story scenes, pick up items, weapons, and ammo, and engage in puzzle-solving.

Combat is triggered through random enounters, warping the player to a flat grid environment, where they are in control of all three main characters; Koudelka, Edward Plunkett, and James O' Flaherty.

With enemies and playable characters positioned on this grid, the combat is turned-based, with the order determined by the Agility stat governing both players and enemies. Each party has access to physical and magical attacks and other abilities, such as status effects, buffs, debuffs, and healing magic, with the player party also able to escape from battle.

After battle the party gains experience points, which can be distributed to any stat for any character, and occasionally items, Key items, and weapons.

Weapons and magic will also gain skills points, which increase with use in battle, allowing many benefits such as; multiple hits per turn, wider area of effect, or simply better damage/healing.

The survival horror elements are the limited inventory (although ammo and restorative items stack), and the weapon breakage system. Melee weapons will break after a set amount of use, while guns are limited to the amount of ammo currently stocked.

Set in 1898 in Aberystwyth, Wales, the game follows the mysterious occurrences surrounding Nemeton Monastery and the three protagonists who, by chance, are forced to investigate its dark history.

After a series of troubling visions, Koudelka Iasant, a young gypsy girl with supernatural powers, arrives at the Monastery. There she meets and rescues Edward Plunkett, an adventurer, and Father James O'Flaherty, a bishop on a holy mission from the Vatican.

During their investigation, the trio encounter as series of troubling events, with both human, and supernatural elements at play; The tragic phantom, Charlotte D'Lota, who haunts the monastary spreading misery and hatred over her unhappy death. The furtive thief, Alias, who lurks in the shadows to ambush the unwary. Roger Bacon - an enigmatic man who claims to be the 13th century philosopher, rendered immortal. And an encounter with bestial Gargoyle, an amalgam of the malignant energies of the monastary.

Many years before these events, Elaine Heyworth, former belovèd of James, and wife to his friend Patrick Heyworth, was murdered in her home by a band of thieves.

Out of sheer grief, Patrick pursued dark means to bring her back from the dead, and sought the forbidden text - the Émigré Document - reputed to have to the power to do so.

He and his servants, husband-and-wife, Ogden and Bessy Hartman, moved into the Nemeton Monastery to pursue his endevour. With many human sacrifices he managed to bring his wife's corpse back to life, except she was an inhuman monster, with her tormented soul seperated from her body, and crying out for help.

It was Elaine's tormented soul that Koudelka had heard, drawing her to the monastary. After fighting their way through monsters, Koudelka, Edward and James eventually uncover this, and determine to put a stop to it.

With advice from Roger, they set monastary ablaze, and make their way to the Church, where Elaine resides.

There are three endings to Koudelka;

Given the events seen and referenced in Shadow Hearts, the Bad Ending is considered the canonical ending.

Hiroki Kikuta, best known for composing the music to Squaresoft's Seiken Densetsu 2 and Seiken Densetsu 3, while working at Square Co., Ltd. established Sacnoth in 1997 with funding from SNK Playmore|SNK. Unhappy with what he considered as the disjointed, juvenile, and stagnant nature of most Computer role-playing games, Kikuta had intended to take the genre in a whole new direction.

Internal quarrels within Sacnoth had led to a compromised product. Kikuta had wanted to develop an action-based battle system, citing Resident Evil as a source of inspiration. However, his employees were adamant about releasing something closer to the kind of games that Square had been making.

A manga sidestory, written and illustrated by Yuji Iwahara, was published in Kadokawa Shoten's Monthly Ace Next.

Written in January 2000, "Koudelka - The Mansion's Scream" is a novelization of the main story, written by Japanese author "Nahoko Korekata". Unfortunately, due to its rarity and that fact that it was only produced in Japanese very little is known about it, other than it being a supposedly lackluster novelization.

What is known is that it expands somewhat on the character of Charlotte, as she recites nursery rhymes her mother taught her, and delves slightly deeper into Koudelka's relationship with Edward.

Published by "Pony Canyon", Nov 17, 1999, the game was adapted for a brief six-part radio drama. It loosely follows the plot of the game, but makes many alterations to fit the short running time.

Bessy and Ogden Hartman, and Charlotte D'Lota are not featured, although some of Charlotte role as a ghost has been incorperated into a new character, Alicia.

The music is the same as that used in the game.

Dutch magazine Power Unlimited gave the game a score of 6.0 out of 10, praising the cutscenes, but criticizing the combat sections and calling Kikuta's music "a disaster".

NTSC Cover
Add a photo to this gallery

Early banner at a game expo 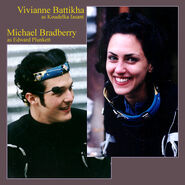 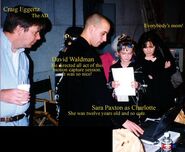 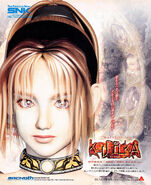 Retrieved from "https://shadowhearts.fandom.com/wiki/Koudelka_(Game)?oldid=35415"
Community content is available under CC-BY-SA unless otherwise noted.