The samurai bodyguard of the Kawashima family, Kurando, as suggested by his master, Naniwa Kawashima, decides to join with Yuri and his party after rescuing Yoshiko, Naniwa's adopted daughter. It was told in the game that Kurando's mother, Saki is the sister of Yuri's father; this makes Kurando and Yuri cousins.

Young Swordsman
A brave young samurai bodyguard. He protects the lives of his master and his master's young daughter.

This brave young swordsman trails his master and his master's daughter like a shadow and is always there to protect them with his life.

His innocent appearance belies his abilities as one of the finest swordsmen in the world. Like Yuri, he also has the ability to morph into monsters.

Not much is known about Kurando because he isn't the most talkative type. However, he is deeply loyal to his master, and cares deeply for his mother, even if she can be eccentric at times. He's also shown to be fond of Anatasia towards the end of the game, showing that he does eventually return her feelings.

Kurando is last playable character in Shadow Hearts:Covenant, appearing shortly at the beginning of the 2nd disc. At first he is only known as 'Young Swordsman', and he and Blanca must fight and escape the soldiers after him. Later, he teams up with Yuri's party and properly introduces himself.

Kurando is the only other character in the party unable to use Crest Magic. Like Yuri, however, he is capable of fusing into Demons. Before he gains his first fusion, his MP is 1, and he can only attack or use items.

He can have a maximum of 5 Hit Areas.

Kurando has also appeared in Chaos Wars as one on the many cross-over characters from the Shadow Hearts series.

His ultimate skill is to transform into Jutendouji, and use "Heavenquake!", the same as in Shadow Hearts: Covenant. 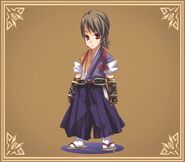 Retrieved from "https://shadowhearts.fandom.com/wiki/Kurando_Inugami?oldid=37702"
Community content is available under CC-BY-SA unless otherwise noted.