La Sirene was revered by the natives as a god. After they left, the Lafiette Pirates remain to guard the altar.

La Sirene serves as a pretty good character that can take a beating. Her Vitality and Power are pretty high, and her custom support abilities can increase Physical or Special Defense for all allies. Her Cure Plus and Resurrection abilities serve just as well to patch up injured and unconscious allies.

The Ocean spirit wearing the surging sea. Has a gentle nature; responds to tenderness and woe. Her tears form a tsunami that swallows all evil floating in the ocean.

♦ La Sirene begins with these abilities.

All of Thunderbird's fetishes are those of creatures of the sea, specifically; a Whale, an Orca, a Shark, and a Dolphin. 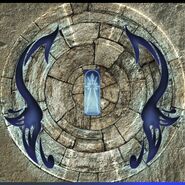 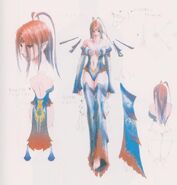 A French term for either "siren" or "mermaid", La Sirene is one of the many names given to the Mami Wata, water spirits that are associated with fertility, healing and beauty. It shares also, the name of the consort to the African ocean god Agwé, which was introduced to the Caribbean.

Retrieved from "https://shadowhearts.fandom.com/wiki/La_Sirene?oldid=34986"
Community content is available under CC-BY-SA unless otherwise noted.