Ocean spirit that Shania must defeat to accquire the La Sirene fusion.

An ocean spirit revered in the Carribean that protects the sea. The waves are its body. Of a gentle nature, it won't lend its power to those without mercy.

It uses Fake ring, so you should equip Pocket Watch or pray for your life...

You should know that this spirit inflicts heavy HP damage with Bright Oracle, so increase Special defensive power with Arc Barrier, but there's a possibility that La Sirene might counteract it with Arc Surge so watch out. You better need to prepare a lot of Thera items: leaves, seeds, roots etc.

Remember it might knock you down or prepare for double attack (if you're really unlucky). Try not to let its Stock rise too high. If you have Tatan'ka's Rumble Roar be sure to use it, as long as La Sirene is in the right position. Knock it down if you can, it inflicts extra damage and use Fire-based attacks/spells, if you have the MP. 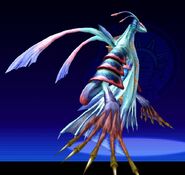 La Sirene is one of the many names given to the Mami Wata, water spirits that are associated with fertility, healing and beauty. It shares also, the name of the consort to the African ocean god Agwé, which was introduced to the Caribbean.

It is also French for either "siren" or "mermaid". Both creatures being linked to the sea and water.

Retrieved from "https://shadowhearts.fandom.com/wiki/La_Sirene_(Boss)?oldid=32662"
Community content is available under CC-BY-SA unless otherwise noted.