Creature that lives in a river and devours fishermen.

Legendary dragon that lives in the Wear River in Englad. In warmer weather, it wakes from hibernation, preys upon fishermen and devours their hearts. 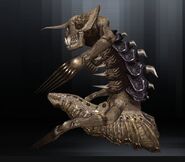 The Lambton Worm is a famous wyrm in English folklore.

The story goes that, in the middle ages, a member of the Lambton family, John Lambton, caught an eel-like monster from the River Wear and threw it down a well, despite warnings of its nature. There it grew into a monsterous size.

When John went on the crusades, the serpent escaped and started devouring all that came near it. Many died trying to vanquish it - and it could simply reattach parts of itself that were sliced off.

When John returned, he sought to slay the beast, and correct his mistake. He sought the advice of a witch, who told him to don spiked armour. John encountered the worm, which tried to constrict him, but impaled itself on the spiked armour, finally killing it.

Retrieved from "https://shadowhearts.fandom.com/wiki/Lambton_Worm?oldid=36918"
Community content is available under CC-BY-SA unless otherwise noted.