Demon created from a woman who died during childbirth.

Once a normal woman, she died during childbirth and now walks the night as a hideous demon in search of her lost child. 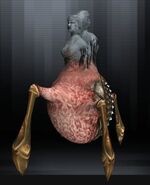 The Langsuir is a Malay female vampire creature; the remains of a woman who died from childbirth. She sucks blood through a hole in the back of her neck, primarily preying on children - drinking the blood of males, but devouring females whole.

She is depicted as black-haired maiden dressed in a green robe, with long, talon-like finger nails, but is said to be able to detatch her head from her body and have it fly around independently. She can also take the form of an owl or night-bird.

A deceased woman can be prevented from returning as a langsuyar by putting glass beads in the mouth of the corpse, a hen's egg under the armpits, and needles in the palms of the hands. The deceased woman then cannot become a langsuyar since she cannot open her mouth to shriek or wave her arms and open and close her hands while flying.

They can also be warded off by the use of charms or the white ginger lily.

Retrieved from "https://shadowhearts.fandom.com/wiki/Langsuir?oldid=36927"
Community content is available under CC-BY-SA unless otherwise noted.