Enemy in Shadow Hearts: From the New World

The anger of ghosts whose existance has been forgotten. Consumed by hatred for all those who have ignored them, their eyes are full of blood-thirsty loathing. 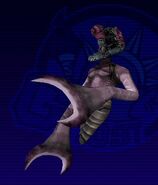 Side profile
Add a photo to this gallery

The Lari-Lari is a monster from Bolivian myth. It's described as a chimera-like creature, with the body of a cat, the wings of a crow, and the tail of a lizard.

By day it was invisible, (unless there was an eclipse), but would hide away in a lair. When night fell, it would venture out to prey on sleeping humans. It sometimes would clatter on the roof of a house scaring the occupants inside, or stealthily sneak in without them knowing.

It had an aversion to bull horns - houses decorated with such, could ward the creature away.

Retrieved from "https://shadowhearts.fandom.com/wiki/Larilari?oldid=30385"
Community content is available under CC-BY-SA unless otherwise noted.