A travelling wise man, he seems to know an awful lot about Yuri.

This wise sage is deft in the ways of Yin and Yang and Feng Shui. He hints at some past connection with Yuri and Bacon.

Yuri skeptically dubs this old man a "Quack Oracle" at their first encounter. The elders from a neighbouring village had hired Zhuzhen to look into the strange disturbances in Zhaoyang Village.

Zhuzhen calls himself "the true ruler of the nine heavens. The absolute sage". Contrary to Yuri's original assessment, he is no fraud. Zhuzen is a knowledgable and experienced spirit healer, a master of Taoist magic. He was a student of Master Xifa, the guardian of the White Tiger temple at Wuhan. Also, he too is an exorcist like Alice.

Zhuzhen first met Ben Hyuga and his friend Zhongyun Zhen in 1898, when they saved him from Dehuai's henchmen. The trio joined forces to battle the warlock Dehuai and stop the Valorization. In order to halt the ritual, he was forced to deal the killing blow to his friend. Dehuai is his brother.

He first met Yuri and Alice in a village possessed with a Yamaraja. He was accompanied with Wander Mieyuan. After defeating Yamaraja: Earth, he leaves. Later, he is met in Dalian as he tries to heal Alice of her curse caused by Li Li.

After the Reverse Demon's Gate Invocation, Zhuzhen and Alice are exorcists for hire in Europe. The player sees them in Prague, Germany.

Equipped with staves, Zhuzhen attacks his foes for fairly average damage. His real speciality however, relies on offensive "Yin-and-Yang" magics.

Though fire based himself, his magic uses a varity of elements to take advantage of his enemies' elemental vulnerabilities.

Zhuzhen Hiking in the Mountains 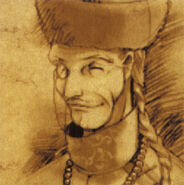 Retrieved from "https://shadowhearts.fandom.com/wiki/Li_Zhuzhen?oldid=33427"
Community content is available under CC-BY-SA unless otherwise noted.