Formally a chaste and pious man, extensive mutations have rendered it inhuman. Hidden away underground, it waits patiently for suitable prey that it may lay its larvae in. As a cruel irony, the desire to breed is its only motivation.

Keep Koudelka and James away from this boss if you want them to live, using Edward to draw his attacks and attack him up close.

Have James and Koudelka alternate between fortifying Edward's strength and vitality, healing him and hitting the boss with any level 2 spells that Koudelka has. If Edward has a weapon that can inflict poison, there is a high chance that the boss may get poisoned.

This boss is quite difficult and has a variety of tricks he can use, both magical attacks and physical.

He has no set pattern between his attacks and will attack randomly with multi-target high-level magic that deals damage and has a chance of inflicting silence as well as a very dangerous physical attack that also is a multi-target move.

The "safest" of his attacks will only target the person in front of him, but still can deal 300 damage to that character.

Remove silence from Koudelka and James as soon as you can otherwise you're in for a extremely difficult fight. Other than that, just keep up the pressure on the boss and heal when necessary, and the boss should fall. 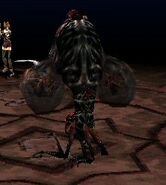 Side
Add a photo to this gallery
Retrieved from "https://shadowhearts.fandom.com/wiki/Mad_Fly?oldid=36727"
Community content is available under CC-BY-SA unless otherwise noted.