Boss Enemy in Shadow Hearts: From the New World

Gilbert after getting the power he wanted. It's a hideous form, but for him its godliness. His wish fufilled, he now longs to make everyone else like him.

One may jump for joy since he or she can finally get rid of the annoying professor, but one may question "why does have to be so hard?"

Malice Gilbert's attribute is dark, so La Sirene is the best to use. Malice Gibert will use Panic which continues to reduce SP each turn, which can be annoying.

Use Ricardo's Serenata or a Feather Braclet to prevent him from using it.

Malice Gilbert will usually go after one person with Deep Grudge or his regular attack, but just use La Sirene's healing ability of a Cure Stellar to take care of your targeted party member. 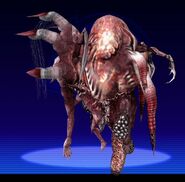 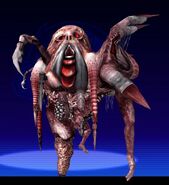 Other side profile
Community content is available under CC-BY-SA unless otherwise noted.
Advertisement