Final boss in Shadow Hearts: From the New World.

A negative sun shines beyond the Gate. Pure, boundless power, without thought or feeling. Will not set while ill-will remains in the world. Hatred keeps it burning.

If you are taking part in the Snaps Sidequest, then this is the only chance to take Lady's and Malice Unbral's picture.

Before you begin the fight, equip your characters-of-choice with their best weapons and, if possible, with cruxifixes or pocket watches. It's recommended that they are leveled at about 70. It'll make this battle alot easier. More so if you've finished all the sidequests.

For the entirety of the fight, Lady herself will take no damage from any moves or attacks. The only way to kill her is to kill the Unbral. So you should be focusing mainly on the Unbral for most of the battle, only getting rid of her stock when needed.

It is important that you do not use any stats boosting powers during this battle, such as Sanlittobel or Entrance, as Lady will use Lost Progress canceling it immediately.

The Unbral will variate between using Hexes, which are basically souped-up versions of your elemental crests. How much damage they do depends on your party character's elemental weaknesess, but on average they'll do between 120-350 damage.

Keep an eye on its Stock and keep it low to limit the use of Calamity Gaze, which will hit all party members for about 300-500 damage and give them the continuous ring status. Especially since from times to times Lady will cast Zeal Steal to absorb one of the members' Stock for herself and the Unbral. If you fail to keep the gauge down, be prepared for a massive combo from Lady and the Unbral, which if you are unlucky, can devastate your party. Namely, Calamity Gaze followed by Crimson Raid (if you're lucky), or Malice Dirge (if you're not).

It's easy to tell if they're going into a combo, as Lady frequently uses Entrance on the Unbral. Just try to defend against it if possible and heal when it's finished.

Combo like crazy in this battle and use your strongest attacks. Ether Purge, Sun Flare and Melt Crest are pretty useful,as are any Keys, if you have them. The most important things are to just keep an eye on your health and their stock gauges. If you just keep pummeling the Unbral with combos, it'll go down soon enough.

Make sure that you have alot of health left before you deliver the finishing blow though, as after it dies, Lady will use Malice Dirge which deals about 500-700 damage to the whole party. 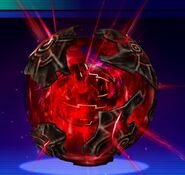 Unbral may be a mistranslation of the Latin word "umbra" which means ‘shadow’. It is also the technical term for the centre of a sunspot.

Alternatively, the word might have meant to refer to "umbral", which is the Spanish word for "threshold".