Margarete Gertrude Zelle is a world famous spy. She meets Yuri and Alice by chance and decides to tag along on their journey.

Malkovich
Real name Margarete, she is a talented spy who has taken the role of Yuri's protector. Her next active duty assignment is to be in America.

Margarete Gertrude Zelle, code name "Malkovich", is an expert in the arts of espionage. Yuri and Alice first meet this "Alluring Spy" in Fengtian, after accidentally walking straight into a bomb alarm she set to distract civilians while impeding the Japanese army's operations.

She tags along with the two to learn more about their mysterious powers, believing that this information will give her country the upper hand. As she journeys with them, however, she finds this objective to be meaningless compared to fighting alongside them. She grows to envy and admire the bond that Yuri and Alice share, as well as their freedom from the burdens and responsibilities that come with a life steeped in politics, national interest, and other material concerns.

Little is known of her past, other than the fact that she has posed as an American journalist researching the subject of "War and Orphans", and also told Alice that her home was in Paris. Her father is also still alive, and watches over her. It is implied that he is also a spy.

Margarete makes a cameo appearance in the Cathedral District, in the city of Paris if the Item Trading sidequest is completed in the correct order. She apparently still works as a spy.

If given the Research Paper she'll present the party with Lucia's ultimate weapon: The Nemesis Fan.

Margarete is a headstrong and sassy woman who is not one to mess with. At first thought Margarete seems like a cold and sneaky person as she is portrayed as a bomb specialist and a spy, but has a caring side for innocent people though since she put a second bomb to lead other distract the innocents away from the Train Station so her real bomb could go off without anyone harmed or killed, but the irony is that her bomb to save the people from the station almost harmed or killed Yuri and Alice. Margarete also always has a plan but of course her plans of escaping got ruined as Dehuai began to interfere with the gang. Also Margarete when she meets Yuri and Alice was to use them as tools to help her country in the war. But as she continues to travel with them she sees that Yuri is like a hero always protecting the princess from evil, and then felt terrible for ever thinking that idea.

Using firearms, Margarete attacks her foes from a distance, dealing average damage, but with a high chance of doing critical damage.

Primarily a support attacker, her "Secret Weapons" target her foes' weakspots and enable her to learn their stats and elemental weaknesses.

"Yeah, I could use some help here." (Secret Weapons) 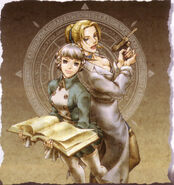 Margaretha Geertruida Zelle (1876-1917) was born to an extremely well-to-do Dutch family, and would become infamous in World War I as the German spy "Mata Hari".

During this time she had intimate relations with a number of military figures, and was convinced to spy for German causes, becoming agent H-21. She also acted as a double agent, supposedly spying on Germany for the French. Reports and other evidence seem to indicate that many of her efforts were tainted through counterespionage - she was used and purposefully fed information that was intended to be given to the enemy.

Through Mata Hari's interactions with high-ranking officials during World War I, many Allied soldiers lost their lives. In 1917 she was arrested, imprisoned, tried and sentenced to death by the French. She died at the age of 41 at the hands of the firing squad.

Retrieved from "https://shadowhearts.fandom.com/wiki/Margarete_Gertrude_Zelle?oldid=37309"
Community content is available under CC-BY-SA unless otherwise noted.