Dressed in fashions of a bygone age, she was a prisoner of the Monastery until her sad and lonely death. Spurned by the man who loved her, she was left to rot in the prison. For cruel amusement, the guards forced her to wear her wedding dress and locked her away. Death is her only release.

A zombified woman dressed in a decaying wedding gown, with the veil still partly attached.

Don't bother using any physical attacks against her as they do pitiful damage. Your best bet is to have your party (even Edward) cast heal on the Mummy Bride (which should deal around 500 damage) or flare.

The battle should be over before it even has a chance to attack. 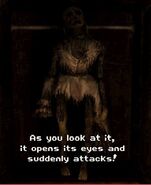 Hiding in the cupboard
Add a photo to this gallery

Retrieved from "https://shadowhearts.fandom.com/wiki/Mummy_Bride?oldid=35271"
Community content is available under CC-BY-SA unless otherwise noted.