An older gentleman whose life is constantly threatened by assassins. His refined manners suggest a man of aristocratic breeding.

Ishimura and Hyuga's former master. Since the death of his daughter in Shanghai one year ago, he has withdrawn from political life but is still a great patriot.

Ishimura and Ben Hyuga's former master. Naniwa Kawashima is the biological father of Yoshiko Kawashima, Kato's true love who lost her life in Shanghai, China during the previous Shadow Hearts.

Following the death of his daughter, Naniwa decided to withdraw from political life but is known to still be a great patriot. Naniwa now lives in Yokohama, Japan, with an adoptive daughter whom he gave the name Yoshiko Kawashima, in memory to the previous Yoshiko. He hired Kurando Inugami as the personal family bodyguard to protect her. 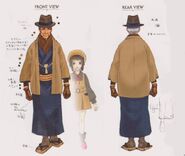 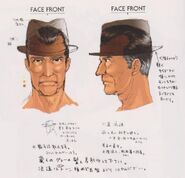 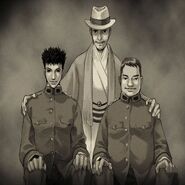 Add a photo to this gallery
Retrieved from "https://shadowhearts.fandom.com/wiki/Naniwa_Kawashima?oldid=33914"
Community content is available under CC-BY-SA unless otherwise noted.